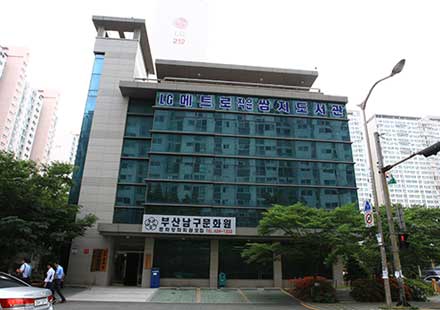 Busan Nam-gu Cultural Center established its head office of 422.96㎡ (one office, three small lecture rooms, one big lecture room) on the second and the third floor of the civil affairs administration field office of a dong residents' center inside LG Metro City in Yongho-1-dong, was approved by the law in December, 2007, and held an opening ceremony on May 8, 2008, in order to discover the traditional local culture of Nam-gu and to become the incubator of Nam-gu, the city of culture, by promoting a unique local culture.

As for its fruits so far, around 30 cultural classes, such as traditional Korean dance, dance sports, tea manners, have been offered in three-month unit since April, 2008, and have obviously settled as the place for the local residents' education and cultural art.

It has been playing the role of the center of local culture in Nam-gu and contributing to the promotion of local culture. For example, it managed a folk culture study for the multicultural families and the cultural center members, a cultural class presentation, and 2009 Igidae moon welcoming festival and co-hosted the research into the folk history with the artists in Nam-gu, such as Nam-gu Folklore Society. It also published 3,000 copies of 『In search for the roots of our region』, a source book of local history for the elementary, middle and high school students in November, 2008, and has distributed them to schools and subsidiary organizations in its jurisdiction and local self governments and cultural centers in the whole country.