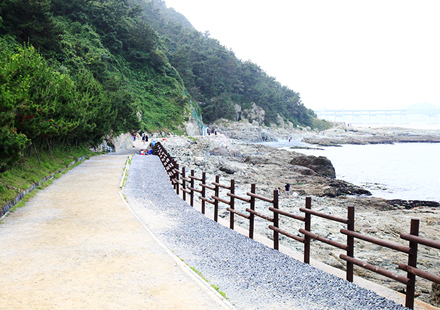 This is one of the eight scenic sights in Korea where the largest beach, Haeundae Beach, attracting a million people every summer with its beautiful moonlit views, adjoins the so-called beach of youth: Gwangalli Beach. Igidae features beautiful coastal scenery. You can get there through a former salt pond at the edge of Gwangandaegyo Bridge over the sea which presents stunning night vistas. On Igidae, you would be succumbed by the compelling scenery such as the view of waves crashing on the rock pool, the spectacular look of Chimabawi Rock, as well as the view of Oryukdo Island from Nongbawi Rock. There is also Oryukdo Island that has been designated as National Cultural Heritage Scenic Spot No.24 with the background of the horizon lingering when you climb throughout Sataegol (Satae Valley).

Oryukdo Island is composed of Bangpaedo Island, Sol Island, Surido Island, Gonggotdo Island, Guldo Island and Deungdaedo (Lighthouse) Island in that order; The name (literally ‘five to six islands’) derives from a phenomenon where the islands appear as five or six because the lower part of Usakdo is divided into two segments (Bangpaedo Island and Sol Island) depending on the level of water. This is also the intersection of the South Sea and the East Sea. On top of that, you will also see cormorants flying to Guldo Island on winter evenings while walking near the islands. Due to these highlights, this trail became a tourist attraction of Busan’s efforts to become known as a ‘Slow City’.

You will discover the panorama of Busan Harbor coming into your view when standing on Sinseondae Cliff, the name of which stems from a myth that sacred people came to the mountain to rest and play. In this area, Prince Andrew Road was built to commemorate his visit in 2001 when he unveiled a plaque to preserve the memory of Providence, the British vessel that landed here in 1797 on a surveying expedition. The road guides you to the nearby UN Memorial Cemetery. From there, you can just walk a few steps to get to Busan Museum where you can learn in-depth about the history of Busan from prehistorical to modern times. Along the Hillside Road called Sanbokdoro, you can also explore more must-visit places such as Munhyeon Gopchang Alley, Jasungdae, Busan-jin Market, and Jeungsan. You will come across the famous tourist attraction known as Forty Steps which embraces the sorrow of war refugees after passing Chinatown and Yeongsun Hill along the former Choryang shoreline in Busan.

The international market where you can find everything at every corner is located in an area where Japanese settlements known as ‘Waegwan’ used to be situated years ago. You will find yourself in an area which has an abundance of traces that allow you to feel the 400-year-old bitter and sweet memories of Koreans when you leave Baeksan Memorial Hall and Yongdusan tower across from Daecheong Road.

After you finish sightseeing of Jagalchi Market that is overflowing with stalls and people speaking in Busan dialect, and Nampo-dong’s theater district, visit Yeongdongdaegyo Bridge: the first sea-spanning bridge in Busan embraces both the joys and sorrows of refugees from the Korean War. There is also a towering cliff, Jeol-young Seaside Trail composed of obscure rock formations & stones and Taejongdae Park on your way to the shoreline.