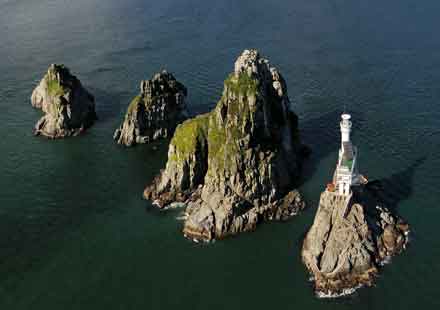 The formation of these island are attributed to a small peninsula which was linked to the land 120 thousand years ago and has been separated from the land due to corrosion waves over a long period. This estimation is based on the fact that the geological feature of Seungdumal, which is the land, and that of Bangpaeseom-island and Solseom-island, which are narrowest to the land, are the same; that is, those were connected with each other in old times. So, those islands are separated from the land.

where the coasts in Busan Bay are developed. In many cases, red soil is found in the terrace face, and red efflorescence is also found. Triple coastal terraces (each height: 35m, 20m and 9m) formed by cutting the easy-sloped vertical hems of the mountain foot are distributed in Gwanganri, which is the type locality, and the highest Haeseongmyeon is the Gwanganri terrace. The terrace face is composed of relatively thick deposit. The deposit is 3~5cm diameter, round and flat coastal gravels, which are red due to fierce weathering. The gravels are very fragile and easily broken by a small shovel. The name Oryukdo (meaning Five or Six Islands) originates from Bangpaeseom-island and Solseom-island (Refer to Explanation of Oryukdo). That is, Bangpaeseom-island and Solseom-island are almost linked below the middle; they appear as one island called Usakdo-island at low tide. They appear as two islands, Bangpaeseom-island and Solseom-island, at high tide. Therefore, they appear as five or six islands depending on the tide. Usakdo-island (Bangpaeseom-island and Solseom-island) is the origin of the name Oryukdo, and it can verify that they were linked to the land in old times, based on the geological composition. Songgotseom (meaning Gimlet Island) is a pointed little island; Gulseom (meaning Cave Island) is the biggest island having a large cave. The water flows from the ceiling of the cave and is enough for one person’s drink. Deungdaeseom (meaning Lighthouse Island), the farthest island from the land, used to be called as Batseom (meaning Field Island) due to its flatness like a field, but it has been called as Deungdaeseom after the lighthouse was established. Except this island, all other islands are uninhabited. The tide around Oryukdo-islands is very fast; thus, dangerous as a waterway. It is said that, in old days, sailors passing this area offered rice to the sea in order to sooth the Sea God and pray for safety. Oryukdo-islands are the gateway of Korea, and are the symbol of Busan Bay because diverse vessels should pass the area to reach Busan Bay, which is the biggest international port in Korea. Furthermore, Oryukdo-islands, the synonym of Busan, symbolize the Busan citizens’ spirit. Since old days, poets and painters keep visiting here, and still many people visit here. This place is also used regularly as a fishing place.