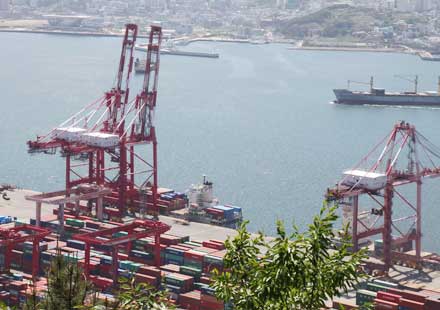 at the left bank of Yongdang-dong seashore, is located at the southern extremity of Uam Peninsula, which is formed by the mountain ridge’s coming from Mt. Hwangryong into Busan Bay. It has a superb view, with sea cliffs and sea caves in which the igneous coast has been sculpted by corrosion of waves.

The geographical feature of Sinseondae resembles the shape of a dragon surrounding a pond; thus, the neighborhood is called Yongdang (Dragon Pond). According to another version, a blood stain was found in sandy soil when cutting Sinseondae to dig a ditch; according to another story, a person named Gayajin became a dragon and ascended to the sky. Folklore said that Chiwon Choi (a scholar in the end of Shilla Dynasty) became a wizard and strolled here; the name ‘Sinseondae’ is said to derive from the story that there are wizards’ footprints and footmarks of white horses which the wizards rode in the big rock, called Mujedeung, on the mountain peak.

It is believed that classical music wizards played used to be heard In old times when approaching. Sinseondae is coved with abundant pine trees; in this forest, there are evergreen broad-leaved trees including eurya, elaeagnus, Korean privet, ivy and vine, and deciduous broad-leaved trees. These include oak, overcup oak, silk tree and platycarya. Moreover, many birds fly into this forest including the rufous turtle dove, bull-headed shrike, gray bunting, wren, narcissus flycatcher, ancient murrelet and gull. After Liberation, this place had been utilized as a swimming resort thanks to its narrow but good-quality sands and beautiful view, and corresponding facilities used to exist. However, it has been changed into a manufacturing area after Dongmyeong Wood was established. Now, the place has been encroached upon and some view has been transfigured due to diverse facilities (Yongdang Container, Busan Container Terminal Operation Corporation etc.) demanded by the development of the area. Around the road to Sinseondae, various facilities are scattered including Busan Museum, UN Memorial Cemetery, Danggok Park, Busan Cultural Center and Dongmyeong Buddhist Temple, all of which are the spiritual support as well as tourist resources. Although the view around Sinseondae has been somewhat changed, and some part is a military operation region prohibited from access by the general public, it is still considered as a wonderful place because we can see Oryukdo-islands and Jodo-island (Korea Maritime University is located there), and even Tsushima Island of Japan is visible in fine weather, from the top of Sinseondae.